jerrysteward59: I don’t know why I was banned. Where I was commonly keeping tabs on an old wilderness Island. And I was happily working on my own floating island too. Often I would check up on the island neighbors of mine even though that they have not been logging in as much. I would find a huge amounts of griefing. On unprotected land I would patch up these broken buildings with Cobblestone wall named grief wall to prevent further griefing. But that fell in when I logged in one day after a long period Of not playing. For the very report of griefing. Made me lose faith in this server.

You griefed the torches in the shop-zone: 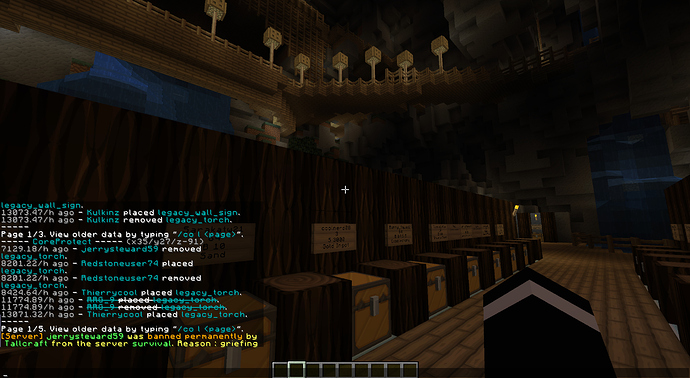 Wow… that is really diminutive. Something that can be easily fixed. Have you ever took the time to install glowstone above it to where players can’t even break it? And how are you even sure it was me? Many of the Torches we’re not even there when I’ve got there. I’m really disappointed… I thought this was a really great server. But with that kind of Sensitivity I don’t think it’s worth it. I really want to get back on.

I’m just saying if you don’t want something to happen make it to where it doesn’t happen. And there were torches when I left. I personally made some torches and added a few jack-o’-lanterns. Not to mention so no one barely bothers to monitor the area in the first place. And there are other ways to program game to where it spawns an enemy when the player breaks in object.

What I’m saying is you made a problem repeatable… and haven’t made any measures to prevent it.

Hi Jerry! I prefer if you are nicer to tall. I don’t like it when ppl are mean. . . It makes me mad. So next time, Don’t grief! Thank you for your time.

I wasn’t being mean I was just being logical to a point. What you perceive to be antagonistic. It’s merely critical thought. There were no warning signs no one told me that was not wanted. I was permanently banned for something that was poorly addressed.

Not my ban, but there’s one thing I’d like to add:
Just because something is possible to do, doesn’t mean it’s ok to do.

After multiple times of checking the forum bans, This is highly in-justified.
People broke /shopzone god knows how many times, and no one reported the ‘griefing’.
Sure I’m no longer a member of Tallcaft but I still would hope my voice is heard. This barely is a minor grief according to the past what, 2-3 years?
I forgot who told me but minor griefs is more than 100 blocks, and that was a 7d tempban.
Jerry shouldn’t of been banned over this.

And how are you even sure it was me?

We log block changes, parts of that are shown in the screenshot I provided.

I really don’t like your attitude, just because you can grief something doesn’t mean you should. And while it needs some work, the shop zone is setup like that on purpose.

Shopzone got griefed hundreds of times,
Not one staff even cared, as it was a easy fix.
Sure, People break torches on accident and all, and never care to put them back as I mostly cleaned up /shopzone.
Jerry should be unbanned.

Hey jerry! Unrelated to your ban dispute, I noticed that you said you fixed griefs yourself. For future reference, always /report the grief at the location of the grief. At the very least, the player who perpetrated the grief will be warned/banned.