Minecraft Name Scottyboy11 I have been banned for less than a day. The reason why i got banned was “multiple griefs”. I got banned by “Lordbyway”. what i did to get banned was not “multiple griefs” it was using caps in chat because 2 people named Stoxes and mocapone stole my head and they kept denying it when i saw them clearly take my stuff. I am new to this server and did not know how to lock a chest until Herobrine_123456 (props to him) told me how to lock it

. Anyway, then i got made fun of by Stoxes, mocapone and now Shellhero159 started bullying me for being a noob steve skin. Stoxes mocapone and Shellhero159 started saying mean and offensive stuff like “oh Scottyboy11 has a small pp actually an invisible pp.” that really offended me. Then more mean things by those three people started rolling in the chat that was specifically for me “Hey do /report Scottyboy11 maybe you will get free diamond you noob.” "Do alt F4 TO CLAIM YOUR UNCLAIMED FREE DIAMONDS YOU NOOB! " At that point i was really offended and started crying IRL. im still sad about what happened that day plus the day that it happened i was having a very bad day. I just found out i got banned on survival today at about 12:30 PM. Thank you for taking the time out of your day to read my ban appeal! Love your server and admire and appreciate all of your hard work Tallcraft!

Well, ShellHero159, who was also banned for reasons he (me) still doesn’t understand, would like to shed some truth on this story (U can ask Overall button or ThatOneLuke to confirm what I am about to say). Basically this player, Scottyboy11, was saying two others stole his stuff, and, after me and others telling them to stop, Scotty started spamming all caps in the chat and wouldn’t stop. Then yes, he was kinda rude and said (Def not me ahah) I had a small PP (I’m a bit too old to say stuff like this ahah). I just put: “what if I do?”. He didn’t like this answer and continued to spam caps. Sure, I said as a joke (to everyone on the server), everyone do alt F4, some other players laughed and were like nah. I put an “xD” and this kid just attached me. I then finished my part in this by putting: “just shut up pls. I arrived on this server 6 days ago and don’t have to either control or take of you or have u complaining like this. Just stop” (something like this). He did some more caps, a couple players reported him and that’s that. That’s the more truthful version of the story… Also, I’m curious about y I got banned but I’ll do a formal approach towards that in relation to mine and my friends situation (ZachQuacks). Thx for your attention!

sorry Scotty, but i honestly don’t remember saying you have ‘a small pp’. shellhero said ‘press alt f4’ as a joke to everyone, he meant it as a joke. also, you cannot blame me and stoxes for stealing stuff - we committed suicide in front of you like 10 times, so u could see our inventories and we had nothing of ur possession. also, saying someone has a small pp is pretty immature…

I can confirm that both mocapone and stoxes had no head in their inventory and even have pictures to prove this.The head seemed to be a paid head so this seems like a rather serious matter.Correct me if i am wrong but the head can be retrieved using the command /skull

The reason for your ban was multiple griefs - please see attached screenshot. Familiarise yourself with server rules. You may have one further chance on the server but further rule breaking will result in permanent ban. 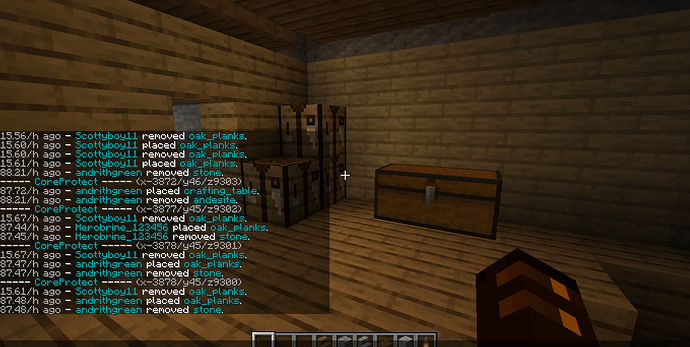