I had just gotten banned for griefing by Tallcraft. I joined the server today to play on survival and I couldn’t. I had one of my good friends ask around on the server about what happened. A player by the name of pans_xual told my friend that I had stolen their beacons. I could say that I had no part in doing so. I don’t even know where the player’s base is. I had no intention of doing so either.I don’t own any beacons either. I do not believe there is any way to prove that pans_xual’s beacons where stolen by me. I’d like to get un-banned for something I did not do.

Thank you for your time and patients~Pupperlove

I do not remember invading someones base and taking their things. For all I know, it might have been someone that I walked in on their base when I first joined. My friend notified me that the player said I had taken their beacons ( which I do not remember doing ) If there is any evidence that I had taken someone’s belongings, I’d like to be notified and I’d like to know if there is any way to make it up to them.

Well since we basically could talk things out,
I think we should do it here. I noticed someday that my beacons at my desert village (I don’t know if you remember or not) were missing so I reported it. Unfortunately I messed up to cantact you whether it had its reasons. I forgot and time passed. Yesterday I reported again in order to find out your name again (New ticket plug in so I had to create another one since I forgot). I think we should talk it out on discord and I will be waiting for your reply =) 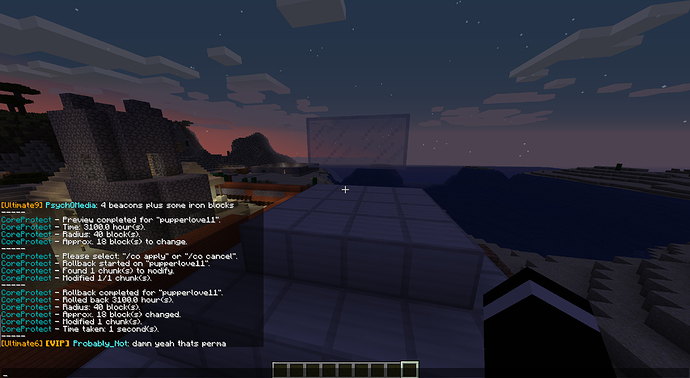 Hi, and thank you for relpying. I’m fine with talking it out over discord. I’ll be able to talk in a few hours if that’s fine. If there is anything that is missing that I can replace, I’d be more then happy to replace it for you. Right now, all I know is that I’m permanently banned, I’d be happy if the ban was reduced at that. If it was some iron blocks that were taken I’d be more then happy to give you some replacements and maybe a little more then what needs to be replaced, as a sorry for waisting your time.

Thank you for notifying me
~Pupperlove

Well actually, it was iron blocks and four beacons…
Pretty sure we can talk that out somehow. All I need is you tag on discord (Best pm it me here) and we are ready to go… Well after 19 hours maybe? xD
Anyway I am looking forward to our little conversation =)

Nope. That was a different player who is banned now. Only iron blocks!

Oh! So be it iron blocks then, I apologize =)

So uhh me and Pupperlove11 have come to an agreement (If it works that way). Pupperlove11 is willing to give me back the missing iron blocks (16 from what I counted from that missing layer) and some ice (half to one stack) and I am willing to maybe (if there were no other incidents) change their permanent ban to a temporary ban until Friday the 25th of January? Would that work?

I suggest we just lift the ban since you’ve been compensated. Is that okay with you?

Im fine with that too =D

Okay I’ve unbanned you. Thanks for resolving the issue with PsychOMedia.