Quick summary on the situation: I was banned and I am not aware why. It says multiple griefs as the cause, but I am not aware of when or where I did them. And no warning was issued or no-one communicated the info so I was very confused.

More detailed approach: I was playing casually 2 nights ago. Go to bed and when I come in the morning, both my friend and I had been banned. He had received a warning and got very scared and did nothing bad since then, still, he got banned now. I on the other hand don’t really know what happened. I started playing on the server like 8 days ago (maybe 1 or 2 more) and at first I might have, when I went exploring, broken some blocks (as we did in the first day) that I was not supposed too. I didn’t really understand the concept of no griefing fully in my first day or two but I sure got the hang of it and followed the rules as I should. I’ve been doing my best to help the server in anyway I can, I’ve been helping the new players (even though me being one myself) get resources to start, I’ve gifted people that died and lost stuff a lot (even tho I had nothing myself); I’ve been trying to follow the rules properly and enjoy my experience in a meaningful way as I was really looking forward to being on the server. These past 3 days I was non-stop working on a farm and a lot of time was put into that too. Basically, I am asking for my ban to be lifted because I had no intention of griefing (not the kind of player I am, as some have already noticed), I’ve been on top behaviour these past like 5 days (expecially after my friend got issued a warning, cause we were kinda worried), I’ve invested a lot of time into it and I would love that it wouldn’t go to waste (I went from beginner to expert like 4/5 in 8 days +/-, so a lot of time invested) and I really am enjoying the community (everyone is very generous and nice and good people to talk to and finding some other place to play with such a good environment would be hard). I also understand that breaking the rules, even if unaware of my actions, is still breaking the rules and I’ll accept the consequences if I must. But I would just still really beg of you to reconsider your choice, and even to lift the ban so I can keep investing my time into the server cause it’s been a really enjoyable time!!

I’ll be waiting for news on the matter and looking forward for a solution.

Thank you for your time and attention!

i agree with ShellHero. I also joined recently, but form what i know he has done nothing wrong - i know Zach got a warning, but i’m pretty sure he didn’t do anything either

We don’t tend to ban for no reason. You were banned for multiple griefs - please see screen shot. Please familiarise yourself with server rules - any questions - ask. You can have another chance on the server but further rule breaking will likely results in permanent ban. 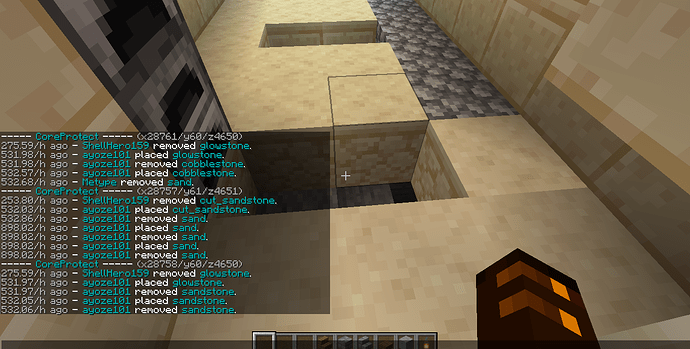 Oh, that was on the first day. I apologize for my actions and will, on return, not brake any rules and keep doing good for the server. Also, I would give what we took back to the person but we didn’t actually keep it as we ended dieing and leaving it behind. If the owner would like us to work to regain his stuff, I’ll happily contribute to it. Anyway, thx for your time and clarification on the matter.