New to Tallcraft? Here are a few beginner tips that might help

As you play, you’ll soon come to find that there are several things you may not know how to execute. This will most likely be commands and such. I’ll list a few key ones you may find useful, but this list may not cover them all. If ever you’re stuck or unsure about what to do, you can always ask a staff member if one is online. You may even ask a regular player for advice, and they may be able to help sort you out, so don’t be afraid to ask.

Home Setting/Ranks
One of the first things you should do when you get on for the first time, is start looking for an area you can settle and call home. What will often happen, and I’ve seen this occur quite frequently, is that a player will build a house, place their items inside a chest, and then die. They get back to spawn, and are unable to find their way back.

As you may have already noticed if you’ve played before reading this, each player has a rank, the list of which can be found on the TallCraft website https://tallcraft.com/ by scrolling down. You’ll also find various other helpful tools, such as links to the map https://map.tallcraft.com/ (Yes, there are maps of all the areas, along with a live feed of player locations on said maps), a list of staff members, the online perks/donation shop and so forth. So give that a look if you want as it contains useful info.

But getting back to the ranks, as you go through them, and unlock new levels, you’ll be granted access to new perks and new commands. For example, the first rank when you log on is Starter 1. Each rank has 10 levels, so Starter 2-10, and instead of reaching Starter 11, you then transition to the next one, Member 1 and so forth. Why I’m bringing this up, is that Starter ranked players will not be able to use the /back command, which allows you to go back to your previous teleportation location. So if you die, you can do /back or /b for short, and teleport to your death point, i.e. your home. But, if you are still a Starter, and you have not set your home with /sethome (home name), you will have to walk back to your house. And if you’ve forgotten exactly where it is… you may never find it again. So remember, always set your home once you settle in, it can really save you later on. Also, if you have more than one home set, you can see the list of them all if ever you’ve forgotten one of their names by typing /home. If you only have one home however, typing this will send you directly to it without having to write out the name.

I won’t go too deeply into this next topic, with the perks given when reaching new ranks, as the website i linked previously specifies the perks and abilities gained. However, a quick overview is that the higher ranked you become, the more homes and commands you can access and use. These ranks are increased by leveling your MCMMO skills, which is a plugin added to the TallCraft server to enhance the gaming experience. For more on that, here’s a link to the MCMMO wiki. http://mcmmo.wikia.com/wiki/McMMO_Wiki 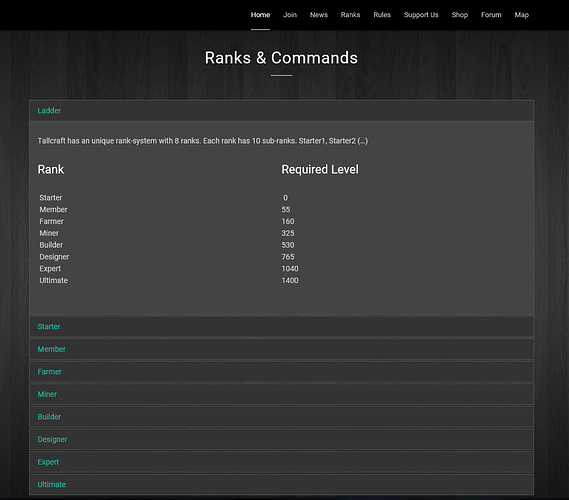 House/Item Protection
So we’ve covered homes and ranks. Oh actually, just to wrap up the homes, it’s /sethome (name) to create one, /home (name) to teleport to it, and /delhome (name) to delete your home if let’s say you want to set up a new home point, but you’re out of houses to set and need to remove an old one. So, now onto protecting your items. It’s nice and all to have a home, but other players might still try and break into your cozy new abode to try and steal your precious goodies. To protect yourself and your items, you can lock and otherwise enchant certain interactive items. This includes chests, doors, furnaces and so forth. To do this, you can do /lock, and then click the item in question. If it can be locked or isn’t already claimed, it should lock, and you can check on its status with /cinfo. That command can also come in useful should you come across a locked door or chest, and you want to know who it belongs to.

Adding Other Players to Locked Items
You may also want to both protect your home from strangers, but allow a friend access to your house, in which case you can either do /lock (playername), which will grant him/her immediate access and add them to the protection, or simply after locking it do /cmodify (playername) to add someone to the whitelist.

So homes, ranks and protection have been covered. That leaves teleportation and basic rules to abide by on the server.

Teleportation/TallCraft Online Shop
So teleportation… many players will ask when first coming online how they can teleport to people. Short answer, they can’t. At least not yet. What happens is that teleportation is a perk that can be bought with the VIP package in the TallCraft website store. Here you’ll have varying things you can buy, like the ability to pick up spawners with a silk touch enchanted pick axe, have more homes (even unlimited homes), get unlimited elytra flight and so on. The VIP package offers several perks. It gives you an instant burse of in game currency if i remember correctly, as well as unlocking almost all of the commands such as /ptime to adjust how the player sees time, /top, giving you several more home slots, giving you access to special VIP only discord servers and more like it, and my personal favorite, the /j or /jump command. The jump command allows you to instantly travel 100 blocks in whatever direction you’re pointing at, or at least to a specific block if one comes in your way. This makes building or even traveling long distances extremely simple, and has saved me so much time… so on that alone, it could be worth buying. 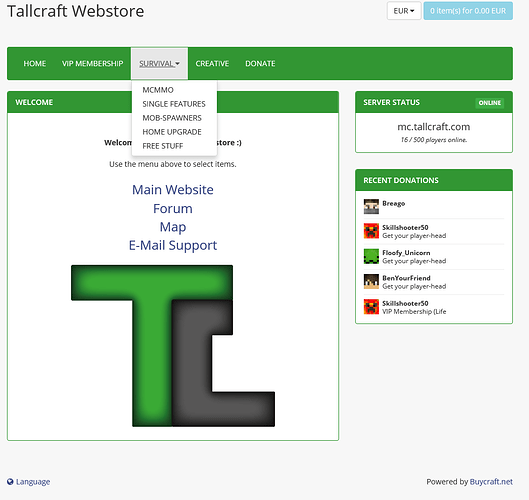 Now of course, there are a few solitary options, as in you could buy the jump command itself, or several others like player time, but that does not come with other VIP benefits, so the choice is up to you. But I’m getting off track. About teleportation, it’s a VIP only perk. To be able to travel to, and have people travel to you. This has made VIP players a useful tool when it comes to teleportation requests, and we’ll often get asked to teleport someone to them, or vice versa. I want to make something clear however. I personally don’t actually mind occasionally helping out a player, and giving their friend a teleport to their base, but you need to keep in mind that this is a perk that VIP players got through donating actual money to the server, and also that we are actual players. We don’t just want to taxi people around all day, and do just want to get on, build and have our fun. So don’t abuse VIP generosity when it comes to teleporting, and it should be fine. It honestly depends on the player in question. So to recap, if you want to teleport, either find a willing VIP member, or buy VIP yourself and enjoy all the awesome perks that come with it. (Honestly, if you find yourself to be a regular player, it’s seriously worth it. Been playing several years now, and it’s made the experience much more fun. There’s also different lengths of time you can buy VIP for, so you can give it a trial run, with the monthly version, or buy the lifetime version which is the cost of three months worth of single month packages.)

If i missed anything major, let me know in the comments and I’ll likely either update this post, or indicate that reading the comment section is also a good idea for new players, as I’ve likely overlooked several things that you might find useful. I hope you like the server, and find the community welcoming. See you in game.
-Anrif319

Nice and comprehensive guide! Thanks for taking the time to write it!