AverseTripod: I was wondering why i was banned as i can see the vague reason on the player search but don’t know what i specifically said that lead to my ban as any dispute i had with another player was dealt with, with me and the other player agreeing to not talk to each other. Even though i didn’t understand the reason i respected their decision to not wanna have any interactions with me so i said my apologies and /ignored the player so I didn’t accidentally cause them grief and i believed they did the same. i would believe that the situation was dealt with. however the following day i was banned without any notice. I haven’t been on this server very long but me and my friends have taken a liking to the server even playing daily and trying to make friends in chat as that’s what minecraft is about. I wanna end this dispute by saying i am very sorry if I caused anyone any amount of grief because of anything i have said and not realized that i was being rude or hurtful. I hope u take my side of the story into account and I’m not gonna explain any interaction as i don’t know what specifically lead to my ban and I don’t want to get the reason wrong. Thank you for taking time to read this dispute and i await your response. - AverseTripod

Your 5 day ban: Tallcraft Players
@ThatOneLuke can provide evidence for the infraction.

So you’re banned for a lil while because of how you were talking with a few people a night or two ago. They asked you to leave them alone but you persisted in talking to them, disregarding their wishes. 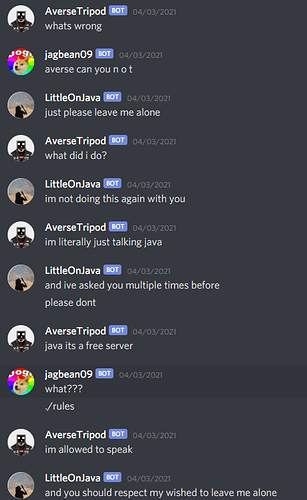 Then, when you finally decided to abide by the rules of the server and stop talking to her, you called her passive aggressive and told her she was rude by wanting to have some privacy. 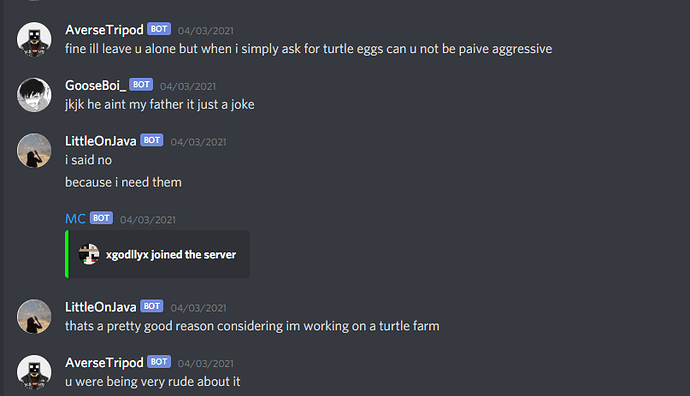 This made several players very uncomfortable and so I don’t feel this needs an unban, considering you’re allowed back on the server in four days as it is. Just take the time to read the rules and you’ll be back on soon.

Here are the rules:

A list of of official rules for our Minecraft Servers Chat These rules apply to both Minecraft and Discord chats. Due to the fact that in-game Minecraft chats are linked to Discord chats, Discord’s Terms of Service and Community Guidelines must also be followed in all chats. Please do not use offensive language Keep the chat “Family Friendly”. We have adults, but also minors playing and we would like to keep the chat clean. This includes no swearing, profanity, racism, or NSFW. Do not spam o…